Tengku Hassanal Ibrahim Alam Shah, a member of the Malaysian Pahang Royal Family and currently reigning as Regent and 4th Crown Prince of Pahang, visited Dümmen Orange in De Kwakel (the Netherlands) on 16 June. The Crown Prince is in the Netherlands to be informed about the possibilities of sustainably strengthening the horticultural sector in Malaysia, and to investigate what possibilities there are to apply this in the state of Pahang, Malaysia.

Leading breeder and propagator Dümmen Orange hosted the Crown Prince during their Flower Trials. Among the topics discussed was Dümmen Orange’s Intrinsa range of genetics. Intrinsa is the result of the breeder’s intensive and modern breeding program, embodied by its Breeding Technology Center, the world’s largest breeding laboratory for ornamental crops. By deciphering and analyzing the genetic code of plants, researchers learn about the precise biological causes for existing or missing resistances. This knowledge enables them to systematically improve and expand on the plants’ inherent traits. The R&D teams of Dümmen Orange have already been able to identify numerous traits to breed for natural resistance and tolerance in the company's best-selling crops. The traits are now gradually being integrated into the breeding pipeline, with the researchers also taking note of the plants’ perfection in terms of flower shape, growth habit and shelf life in addition to the reliability in production and throughout the entire supply chain. 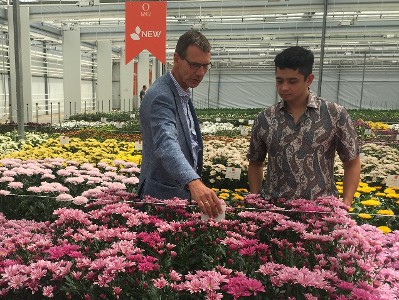